“There are extra dimensions of time unknown to Physics, and beyond that, dimensions of consciousness unknown to Philosophy. We are now unlocking the doors of preconceived notions, moving into a realm of controversy and cover-up, coincidences and cop-outs; it lies between sciences’ greatest fears and the pits of unconventional ideas. We’ve just crossed over into . . . the Temporal Zone.”

Our story begins in a small village town resting along the boarder of Switzerland and France where a community of the World’s best Scientist conduct high energy experiments with the European Council for Nuclear Research, better known to the general public as CERN.

THE CONTROVERSY- Recently, experiments with the Large Hadron Collider, or LHC located at CERN, turned up results showing neutrinos apparently traveling faster than light. If results prove true, this could mean the end of physics as we know it, and end to Einstein’s famous E=mc^2.

THE COINCIDENCE- Meanwhile, Gavin Wince, a mild mannered philosopher with family located near Deerfield Ohio, on the other side of the planet, predicted such an event would occur nearly ten years prior. Upon hearing the results from CERN, Mr. Wince notified Scientists at CERN and set out to do a press release, where upon he was astonished to find out he was a moment behind.

THE COVER-UP- CERN announced that its controversial experimental data was the result of loose giggly wires.

THE COP OUT- Out of fear of not having any explanation that can save Special Relativity, CERN conspired to cop out with the giggly wires excuse until further notice.

…But as fate would have it, another scientific Anomaly arose; this time on the other side of the universe where CERN’s giggly wires could not have had effect. New telescopic images of colliding galaxies reveal that the so-called dark matter was left behind after the collision. Impossible! (based on all understanding). Unbeknownst to CERN, the very same equations Gavin Wince used to account for the apparent superluminal neutrinos, observed by CERN, also accounts for this Dark Matter anomaly. Pitted against a deadline and an open challenge to a leading physicist, Gavin Wince races to beat the clock as he has now found himself in… The Temporal Zone.

This mornings news:
I successfully worked out the application of the Existics transformation to account for both super-luminal and sub-luminal measurements of the neutrino. In the process I also derived the Lorentz Transformation from the Existics’
Kronecker Delta. Have a look: three dimensions of time vs one dimension of time is paying of nicely. 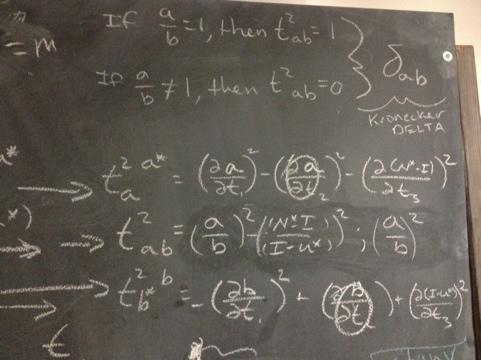 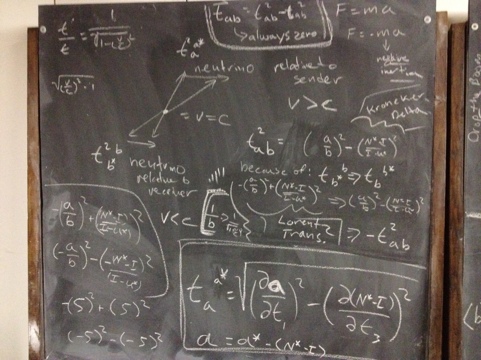 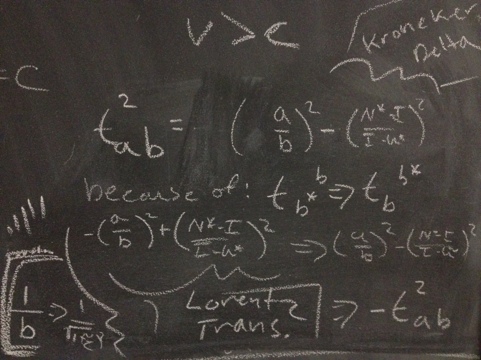